About Contact Us Policies Mailing Lists Radio Video Publish! Calendar Search
Front Page Features:   1 next page | single feature archives | weekly archives
Updates on Mumia Abu-Jamal's case
On April 12, Mumia Abu-Jamal's lawyer Robert Bryan provided an update on behalf of his client, who is on death row at SCI-Greene in Waynesburg, 60 miles from Pittsburgh.  This comes after the U.S. Court of Appeals issued a long-awaited decision on his case on March 27, 2008.

Also, Hans Bennett has an interview with author J. Patrick O'Connor on his book titled The Framing of Mumia Abu-Jamal.

Carlow University to close preschool in favor of dorm rooms
Carlow University gave parents eight weeks notice that their Early Learning Preschool will be closed as of May 3rd.  Marianne Bryan says that parents are devastated by this news and are seeking help from the community to put pressure on Carlow University president Dr. Hines and board members to reverse this short-sighted decision.

Antiracists have responded to the Garage Door Saloon's recent advertisements for "Wetback Wednesdays."

A contributor gives us a brief

Then on Wednesday, April 2,

antiracists picketed in Oakland outside the bar, saying that the problem is not just with a drink special, but that a white supremacist who owns and operates two bars in Pittsburgh is trying to spread his hateful ideas through his business.

Pittsburgh-based Calgon Carbon Corp. locked out 63 members of USW Local 5032 who work at the Neville Island facility at midnight, Feb. 29.

Union members set up picket lines at the plant's two entrances while management runs the place without longtime workers. Union pickets are maintaining a vigilant 24-hour watch on the plant, and have been joined by Steelworkers and other local supporters.

Workers at this Calgon facility make products and provide services to remove impurities from water and air, as well as reactivating spent carbon for filtration systems and impregnation carbons for personal respirator and other uses. 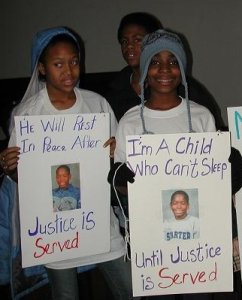 Over five years ago, 12 year old Michael Ellerbe, an unarmed black boy, was shot in the back by State Troopers Samuel Nassan and Juan Curry as he allegedly ran from a stolen vehicle. While his family and community decried his death as excessive force no serious investigation was launched into Ellerbe's case.

Shortly after his son's death, Michael Hickenbottom,  sued both State Troopers saying that they violated his son's constitutional rights. Over 5 years later, a jury has ruled on this suit and unanimously decided that both Trooper Nassan and Corporal Curry  had intentionally shot Michael Ellerbe.  The verdict refuted trooper Nassan's claim that his gunfire to the 12 year old's back was precipitated by the sound of his partner's gunshot.

While Michael Hickenbottom said he felt somewhat vindicated by the verdict but wonders why a major question has gone unanswered.

According to community activists this historic case shows that those who fight tirelessly against police brutality can win.  "I'm hoping that this will send a clear message to police everywhere, that you can not just kill anyone like this and not be punished," says Celeste Taylor a long time anti-police brutality activist.

Listen to a radio report from Pittsburgh on the case, featured nationally on Free Speech Radio News.