On February 15th, hundreds of Western Pennsylvania residents gathered at the sight of 12-year-old Michael Ellerbe's tragic killing. Protestors gathered to demand justice for the boy's family and procecution of the two state police officers who shot the unarmed youth.

All the emotions caused by the police shooting of 12-year-old Michael Ellerbe manifested itself on February 15th, as between 250 and 400 demonstrators took to the streets demanding peace and justice. The rally and march, organized by People Against Police and Violence, remained focused on a family and community still in mourning while fearlessly calling for a systemic shift to peaceful alternatives in our communities and throughout the world.

Pittsburgh police have killed several unarmed African-Americans since the consent decree was repealed in August, rapidly escalating tension between law enforcement and regional black communities. On Christmas Eve in Uniontown at 2:30pm, State troopers Samuel Nassan and Juan Curry shot young Michael Ellerbe in the back. The troopers reportedly pursued the boy as a suspect in the theft of an automobile. When Michael tried to escape the vehicle and sprinted towards an alley, officers pursued on foot with weapons drawn. Officer Nassan testified that he shot the boy because he heard a gunshot from his partner’s gun and believed Michael had fired at them. Officer Curry reportedly had fallen while attempting to climb a fence, causing his gun to discharge. The story presented by the officers had changed several times between the time of the killing and the trial on January 27th including a fraudulent report filed by state police claiming Officer Curry, an African-American, had been the one who shot Michael rather than the Caucasian Nassan. Fayette County District Attorney Nancy Vernon and an all white coroner’s jury recommended that no criminal charges be brought upon the officers.

The February 15th march and rally were driven by optimism and hope along with the sorrow and anger of losing Michael Ellerbe. This optimism was rooted in Ellerbe’s father filing a federal lawsuit against the state police, and seeking punitive damages from the arresting officers. This hope was reflected in the smiling faces and loud cheers emanating out from the diverse crowd. The majority of demonstrators were from Uniontown and the surrounding area, roughly sixty miles south of Pittsburgh. A strong number of children ages ranging from grade school to high school marched along side their friends and extended family. A group of six young girls said they were classmates of Michael Ellerbe and miss him very much.

The procession began at Calvary Methodist Church with a scripture reading and speech provided by Renee Wilson, People Against Police Violence co-founder. “Here we are all people of all colors who know we have to stand for what is right, people that must move when the spirit of God tells us to, whether it is for an unjust war or unjust police killings: this countries undeclared war!”

The energized crowd marched through the streets past the location of Michael’s killing to the Fayette County Courthouse, led by Michael’s family and parish priest Rev. Spence. A banner carried by a middle aged black man and a younger white woman listed hundreds of names from throughout the country under the title: “Stolen Lives Killed By Law Enforcement”. At the rally in front of the courthouse, Rev. Spence announced he is stepping down as Chaplain of Uniontown Police, and called for DA Nancy Vernon to step down from her position as well. Activists, NAACP leaders, several pastors and leaders of faith communities in Uniontown came forward to call for a united movement against police brutality and for justice to be served for Michael Ellerbe’s family. Rev. Trent of Pittsburgh’s Lighthouse Church, a copella soul group Cross Current and the Radical Cheerleaders performed songs calling for an end to the killing of young African-Americans in local neighborhoods as well as preventing the death of those in uniform overseas in Iraq.

While those in attendance roundly cheered and supported links made between unjustifiable violent acts in Western PA, throughout the United States and around the world, the February 15th demonstration in Uniontown never lost focus on a 12-year-old black child who was shot in the back unarmed. Michael and Kenneth Hickenbottom, Ellerbe’s father and uncle respectively, each shared their feelings and hopes in public for the first time. Ellerbe’s soft-spoken father said: “The state police shot my son and are trying to cover it up. We are not going to let them.” His uncle recited a poem while seated in his wheel chair.

People Against Police Violence co-creator Renee Wilson said after the rally: I hope that the death of Michael Ellerbe opens the eyes of the public to demand real changes in the police community. They are not above the law and if they use their badges in this kind away (hopefully) the law will not stand by them.” A family who has suffered great loss and mourning showed signs of strength peering out into the crowd, knowing the tragic loss of Michael Ellerbe’s life has at least given life to a movement: a chance to save other families from sharing their experience. 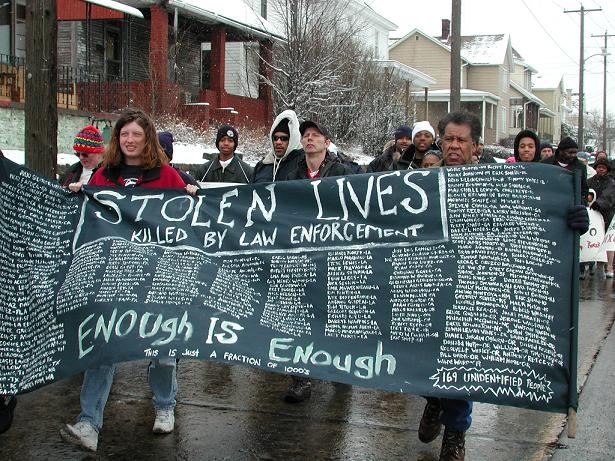 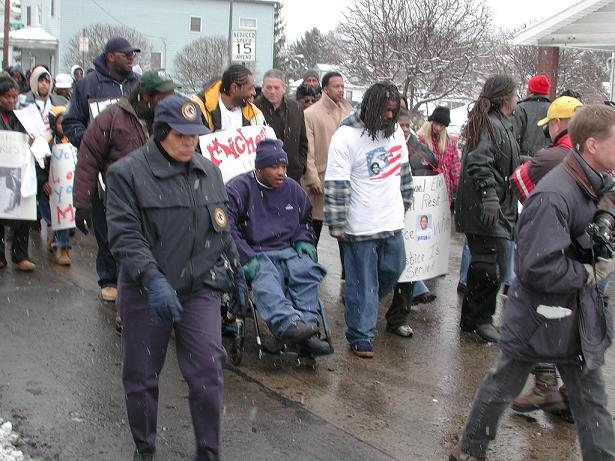 Ellerbe's father, Michael Hickenbottom leads the march surrounded by his family. Hickenbottom is the solemn man wearing a white t-shirt. 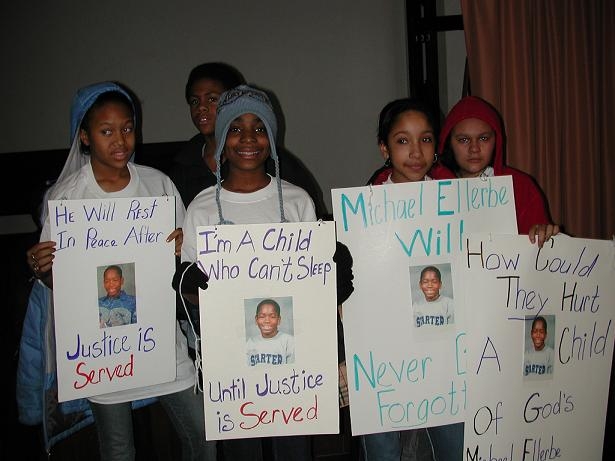 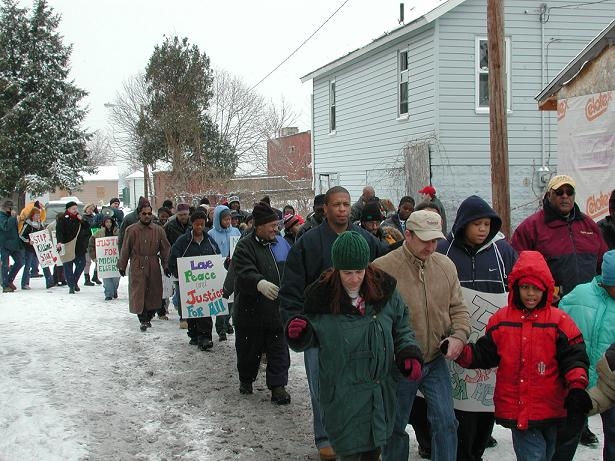 I couldn't get the whole crowd in one shot. That's a good sign!

Readers might be familiar with the case of Mumia Abu-Jamal, an innocent man on death row. Mumia continues to sit in prison for his political beliefs alone. His case shows what the death penalty and the police are all about. Here's a link to a fact-sheet that explains his case and provides evidence of his innocence. Please find it at: